A photojournalist, stumbled upon a newly married couple in The Philippines while covering the Mayon volcano eruption last month, and clicked this completely unplanned and amazing wedding photo, right when the volcano erupted in the background.

This once-in-a-lifetime kind of photograph, capturing the beautiful power of nature in a backdrop to the human experience of love, has gotten him more famous than any of the press photos he ever shot. The story involves nothing but being at the exact spot at the right moment.

Mayon, also referred to as Mayon Volcano or Mount Mayon, is an active stratovolcano in The Philippines. It is the centerpiece of the Albay Biosphere Reserve(declared by UNESCO in 2016), in the province of Albay on the large island of Luzon. 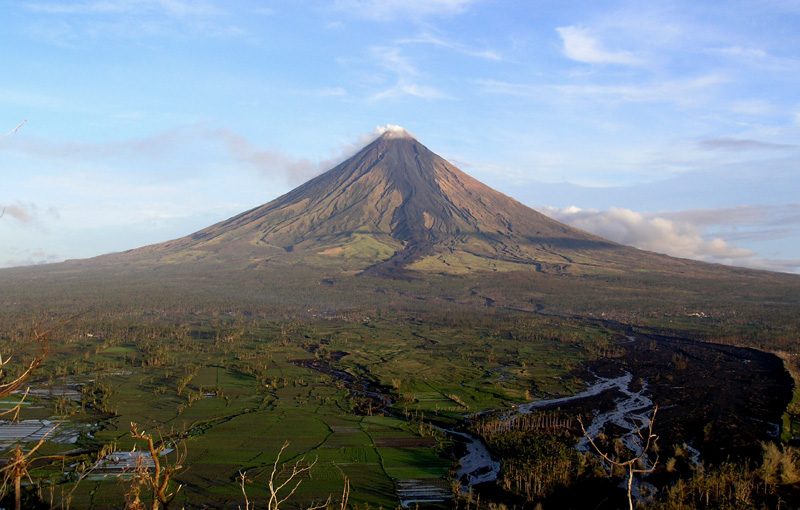 Renowned as the “perfect cone” because of its symmetric conical shape, the volcano with its surrounding landscape is named as the Mayon Volcano Natural Park. Local folklore claims that the volcano is named after the legendary princess Daragang Magayon (English: Beautiful Lady).

The active volcano, which has had 50 eruptions in the last 500 years, recently started erupting again on the morning of 15th January 2018.

To capture the story, Bangkok-based Photojournalist JACK KURTZ had been sent by ZUMA Press, in the month of January to The Philippines. He arrived there on the 20th of January and started covering the Mayon eruption and people relocating to the evacuation center for safety. After doing that for 5 days at a stretch, Kurtz wanted to take a break and have a day to himself.

In Kurtz’s own words:

I needed to run some errands and since the volcano was quiet it seemed a good day to do that. I finished my errands about 4:30 in the afternoon and decided to go to a church a few kilometers away to try to make a sunset photo of the volcano erupting. The volcano had been quiet all day. I didn’t know if it would erupt, and it was cloudy, so I didn’t know if I would be able to see the volcano if it erupted. But nothing ventured nothing gained, and off to the church, I went.

As it got later, the clouds drifted off and smoke started to puff its way out of the cone, signaling a likely eruption. All good signs. I set up my small tabletop tripod on a flat rock, made a couple of test pictures with my Pen F and iPhone controlling the camera with the Olympus OI Share app. Everything was working so I sat down and waited.

While I was sitting there, a couple who had just been married in the church came out to a restaurant next to the parking lot to make their wedding photos. Just as they got to the overlook, the volcano started its eruption. I grabbed my gear and ran over to the restaurant to photograph them. 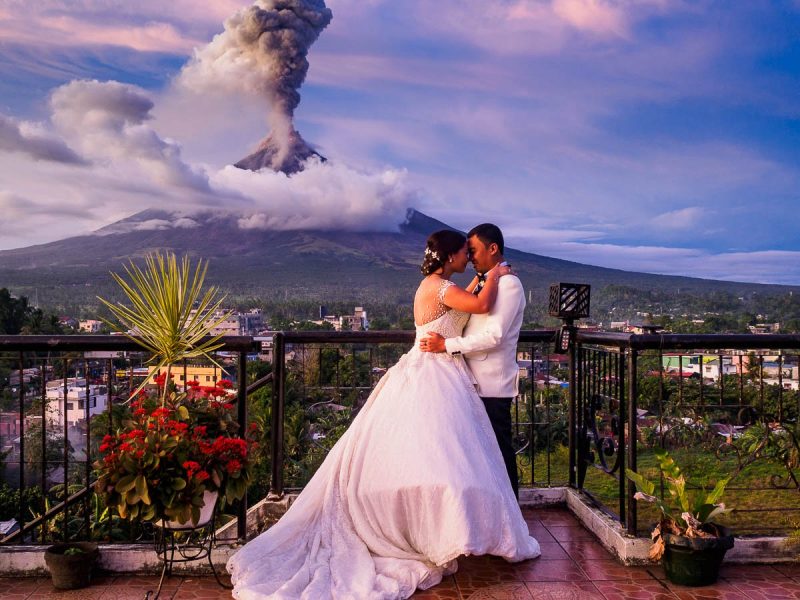 He shot the wedding photograph of the couple, Arlo and Maica, with his Olympus Pen F and 17mm F1.8 lens at ISO 400, F4, and 1/30 with white balance set to daylight. The photo was later straightened and color-corrected in Lightroom. He says,”Because of the time of day and light, the skin tones were a little warm, so I knocked the color temp down a little.”

After a while, when they finished up, everyone thanked everybody else, and Kurtz hurried back to a spot in the parking lot, set up the exposure of his camera, and captured the image shown below. 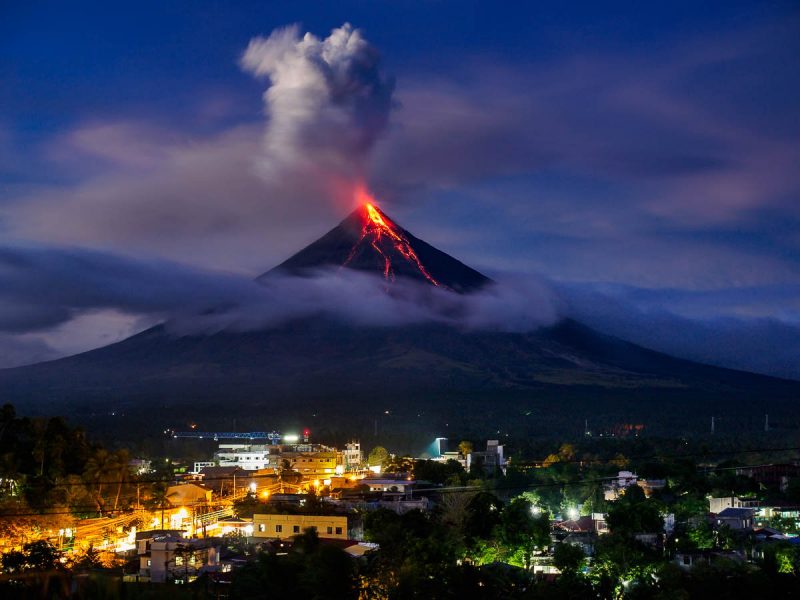 The above photo is also shot on the Pen F with a 25mm F1.8 lens at ISO 200, F4.5, and 85 seconds. The camera was on a tabletop tripod and was controlled by the OI Share app on Kurtz’ iPhone.

The couple, Arlo and Maica, were officially photographed by Nebreja Bros. Media. They also captured beautiful photos of this newlywed couple. You can check them here.

Also, check out Top 8 Fashion Photographers Of India In 2018