It is an imaginary fine art series by British photographer Natalie Lennard.

Travelling through the world and history to depict birth from ancient times to modern days, and squalid to famous, this series uses images and videos to present stories of women both real and imagined, staging birth at its most primally powerful, to enlighten and inform. 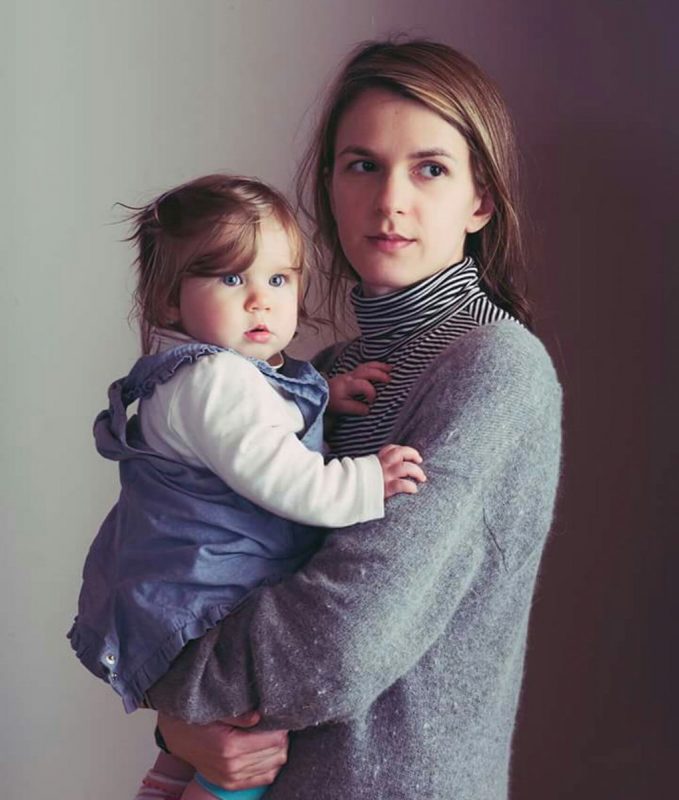 Highlighting key figureheads and writers from the realm of birth philosophy, its timeliness is ever more appropriate in a global maternity and birth crisis.

Natalie has done 4 sessions of this series and each of them is different, but each is as interesting and powerful than the other.

Salle Sauvage translates to ‘primitive room’, a term coined by Michel Odent in reference to his hospital in Pithiviers, France, with rooms designed to accommodate the primal instincts of laboring women. 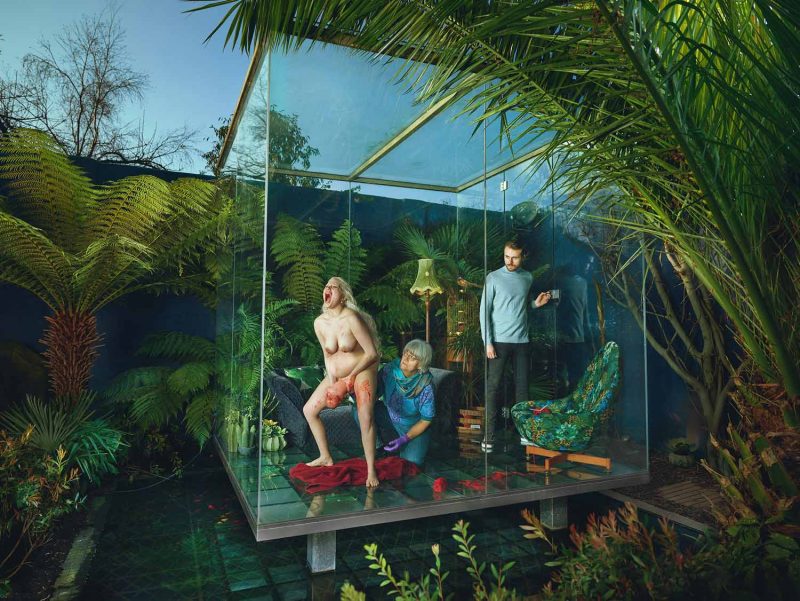 Here, a glass Cube set within the urban landscape of London becomes a metaphor for Odent’s primitive room and a woman’s connection with nature through homebirth. It is as though the walls of a living room have become transparent admitting our spectatorship into the private space of a birthing woman.

Whilst the male partner and the midwife look on in awe, intimidation or both, they guard the space of a brazen Amazonian who stands and delivers with audacious autonomy and a race-encompassing universality. Power, pain, and ecstasy intermingled in one big shout, her baby is born safely, savagely, without interruption into her own hands.

“The bearing of children ought to become as free from danger and long debility to civilized women as it is to the savage.” — Thomas Huxley

A random query by a woman in a hovel in Whitechapel in 1911, that childbirth wasn’t meant to be painful, led the young Dr. Grantly Dick-Read to explore that in the absence of fear, the body’s natural endorphins can replace the stress hormones that cause pain in childbirth. 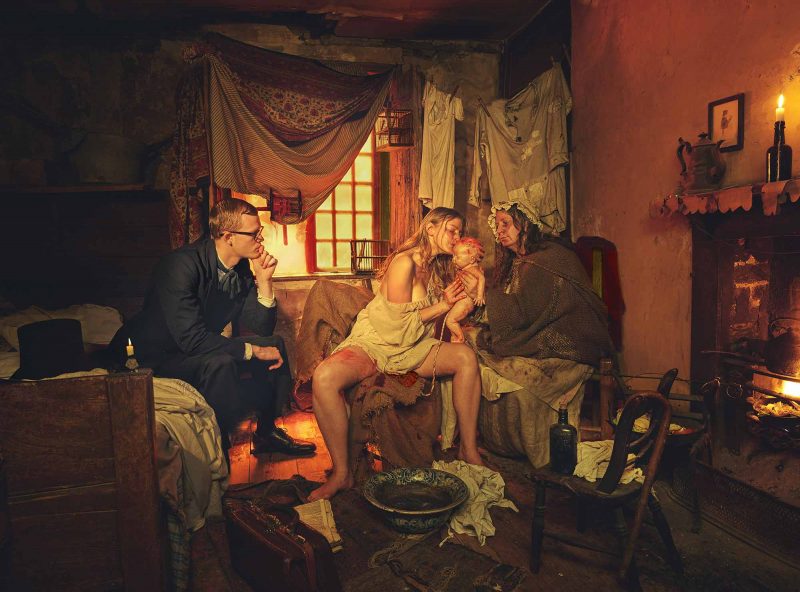 “The window was broken. Rain pouring in, the bed had no proper covering and the room was lit by one candle stuck in the top of a beer bottle on the mantelshelf. My patient was covered in sacks and a neighbor had brought in a jug of water and a basin. And for the first time, I had been refused when I offered chloroform to the woman. Later I asked her why? shyly she turned to me and asked: ‘It didn’t hurt. It wasn’t meant to, was it, doctor?’”

Dick-Read’s cinematic account for the first time is visualized here. With inspiration from the composition of painting ‘The Doctor’ (1890) by Sir Luke Fildes, and other references, the Whitechapel woman is brought back to life – she whose humble influence unknowingly catalysed a doctor’s insistence on listening to women at their bedside – and that our modern culture of increasingly machine-reliant, birth depersonalisation may learn again from.

“Attending births is like growing roses. You have to marvel at the ones that just open up and bloom at the first kiss of the sun… you wouldn’t dream of pulling open the petals of the tightly closed buds and forcing them to blossom to your timeline.” — Gloria Lemay

One summer evening, a man is packing bags for his laboring wife to go into hospital. But he turns to see her in a fallen dress, sitting in an archway of red roses that frame her in nature. Rose petals as confetti, dark wet newborn hair lit by the porch light, a vision of pre-Raphaelite classical beauty. She has given birth spontaneously. 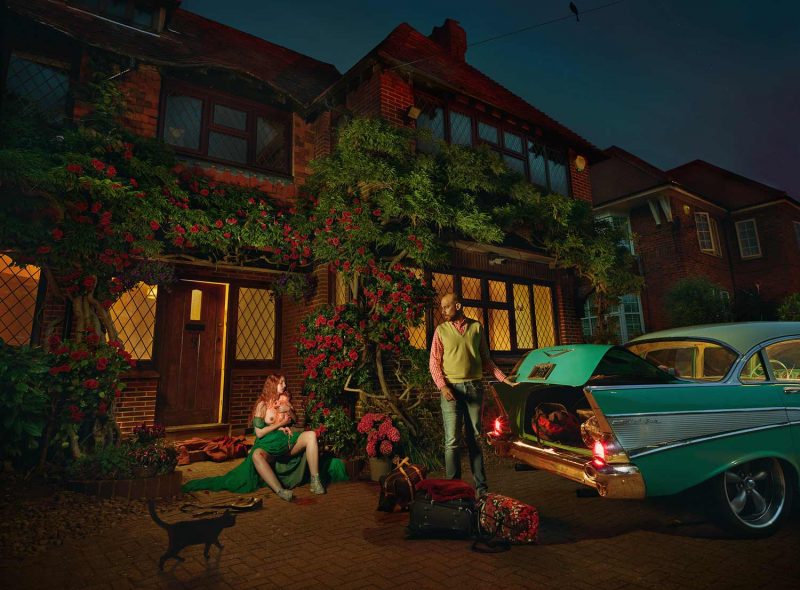 ‘Ejection Reflex’ is a reference to both the milk ejection and the ‘fetal ejection reflex’, a term introduced by Niles Newton in the 1960s, where a baby comes in an involuntary expulsion without forcible pushing. A normal part of most homebirths, it is rarely seen in a hospital due to the routine interference in the process. Mainstream culture tends to hear of it only when a woman gives birth accidentally, in transit. The fetal ejection reflex occurs when a mother feels completely safe and supported, undisturbed by noise or bright lights. Or, it can be triggered by a sense of danger late in labor.

Although this scene is one that happens every day, the woman’s primal self instinctually clings to the cusp of her private boundary in an image as symbolic as it is realistic. The ultimate sacredly private sight: a birthing woman, positioned on the precipice between nature; and the car, telephone wires and surveillance camera, emblematic of the outer manmade world into which a well-meaning spouse was ready to transport her.

THE CREATION OF MAN

Every year we celebrate a natural birth, a story that takes place in the most primitive surroundings. Mary, giving birth to the Son of God in a stable, that infamous image portrayed recurrently in our culture, familiar to even the non-religious. Yet how is it that beyond Julius Garibaldi’s 1891 painting of Mary and Joseph slumped in raw exhaustion, we have never seen a ‘real’ depiction of birth biology, particularly of Mary in upright, ecstatic primal instinct that such an environment would have helped facilitate? 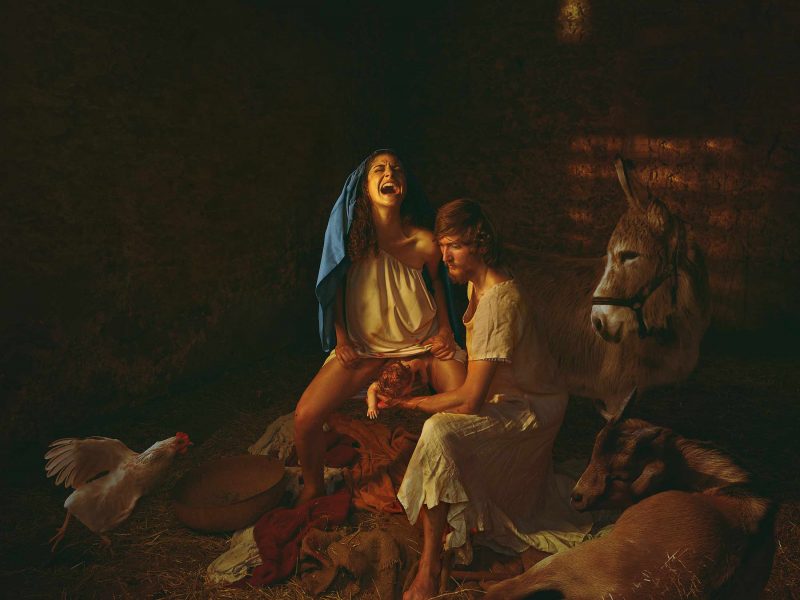 Risking controversy to use universal characters to portray the ultimate ‘birth undisturbed’ amongst other mammals in a dim and lowly environment, suggests to a modern woman that often in birth, less is more. An ideal lies really in the balance of nature and medicine, but to depict Mary in the powerful moment of bringing Christ Earthside, into the calm and steady hands of an actively participating Joseph, protests any notion that the humbling, creative power of woman is anything but as awe-inspiring as the creative hand of God himself.

“Open any obstetric textbook to headless torsos, forceps blades inserted… generations of medical students have been taught with images like these to see women’s bodies as fragmented and sexless. Images of birth which celebrate the energy of women’s bodies could be on the walls of every hospital, and start to acknowledge birth as a psychosexual experience.” — Sheila Kitzinger

This series is in progress, continuing with 8 further images in 2018. To be kept informed of the series’ developments, please follow Natalie Lennard on Instagram (@natalielennard).

For queries on prints, shows, licensing, etc. mail at contact@missaniela.com.

What do you think of this series? Let us know in the comments section below.

Also, check out the photos of Lush Interiors Of MultiBillionaires’ Luxury Planes; Clicked by NICK GLEIS