If you use a Nikon D500 and feel that its batteries drain out much faster than in other Nikon DSLRs, it may not be just you. A new report says that the D500 calculates remaining battery capacity very differently and doesn’t consume all available charge.

This issue was first reported by photographer Martin Beran over at Nikon Rumors.

He experimented the batteries with different bodies and noticed that an official EN-EL15 or EN-EL15a battery that says completely empty in a D500 camera, can still be able to capture 100 to 200 more images in other Nikon DSLRs.

Here’s a short video that he made to show this “Batterygate” issue:

Though the D500 shows fully-charged batteries accurately in the battery indicator as 100%, batteries that are used partially, always show less remaining charge than when put on other compatible Nikon bodies (Beran tested this with D7200, D810, D750, and D850).

“The less capacity is remaining, the difference between D500 and others is bigger,” Beran writes. “If a battery has about 20-30% of remaining capacity in other bodies, the D500 qualify such battery as empty and does not turn on at all.”

Beran made this chart to show how the remaining capacities of 6 different batteries were obtained in five different Nikon DSLRs: 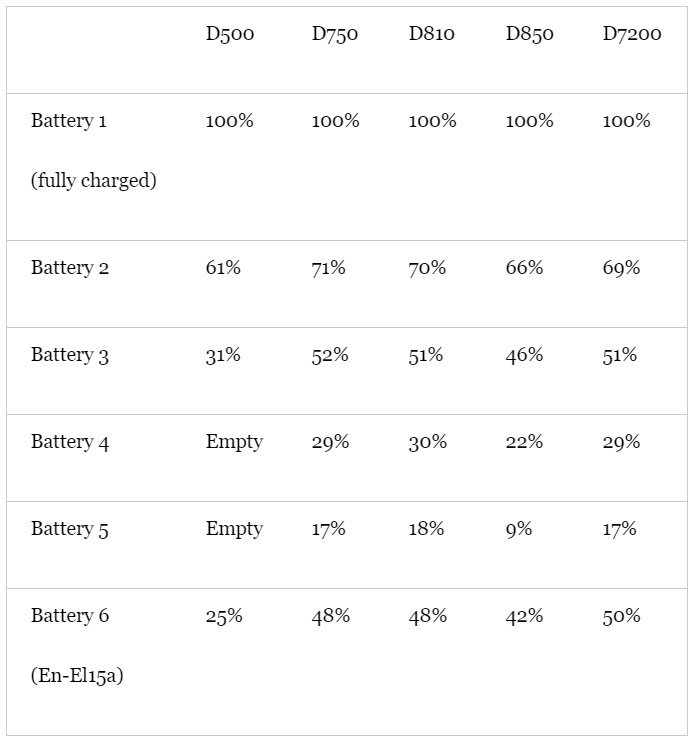 Beran also did test this on different D500 bodies of various ages to confirm that it’s not a flaw with just one camera or a single batch from the factory but the whole lot.

Beran contacted Nikon Service and came to know that Nikon was unaware of the differences in battery charge metering of the Nikon D500 to that of other Nikon bodies.

“My conclusion is that all D500 cameras by design measure remaining capacity of battery lower than other Nikon bodies,” Beran writes. “What makes me confused is the fact that Nikon D500 is not able to fully utilize the capacity of the battery. The number of shots per battery can be about 25% higher if D500 would be able to utilize the battery the same way as other bodies.”

Are you a Nikon user? Does your camera have any problem that you think is a manufacturing issue? Let us know in the comments below.